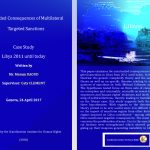 This paper examines the unintended consequences of multilateral targeted sanctions in Libya from 2011 until today. It relies on two sets of theories: the generic complexity theory and the security governance theory as well as on specific theories relating to unintended consequences of sanctions by both Michael Eriksson and Peter Andreas. The hypotheses tested focus on three sets of consequences. Firstly, on corruption and criminality, secondly on severe humanitarian consequences and human rights’ violations and lastly on the strengthening of political factions, thereby leading to instability. When applied on the Libyan case, this study supports both the theories and the three hypothesises. With regards to the theories, the complexity theory proved to be very useful since it is difficult to isolate the data on the impact of sanctions regime from other factors. The sanctions regime imposed on Libya contributed – among other factors – to the three mentioned negative consequences. The most important finding concerns the proliferation of arms. Due to the sanctions regime, political factions were strengthened which showed great reluctance to giving up their weapons generating instability in Libya.